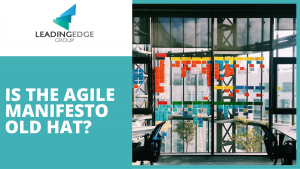 Agile just celebrated its 20th birthday and in all these years, it managed to cross the boundary from the software development world into the mainstream. But not so many people know what is Agile’s official starting point and where it got its name from.

Going back in time, in February 2001, 17 people met for a couple of days at a snow resort in Utah, US, to talk, ski, relax, and also to find some common ground. They were a bunch of software rebels, visionaries in their field. In response to the heavyweight traditional development processes, such as Waterfall or Rational Unified Process, they elaborated the “Manifesto for Agile Software Development”, also known as the Agile Manifesto.

It was designed to empower software engineers and to encourage them to consider alternative development methods that focus more on the customers. Its values and principles promote constant adaptation, responding quickly to change, and being in a state of constant creativity, underpinned by frequent customer feedback.

Since then, the Agile Manifesto provides the basis for a vast array of practices, frameworks, and different ways of working.

Some people are wondering: “In this ever-changing world, is the Agile Manifesto still relevant today, given that it hasn’t changed in any way?”.

Well, based on its underlying values and principles, Agile can be considered a mentality, a philosophy. Instead of going into the technical details and prescribing certain processes, the Agile Manifesto is very value-driven and only promotes behaviors (This over that). The beauty of the manifesto is that it has very wide applicability and these behaviors can be exhibited in many domains, not just in the software development world.

Nothing in the Agile Manifesto is actually new. People have been embracing those values and principles way before 2001.  But what those guys achieved back then was to summarize and encapsulate everything into one impactful document, their own Declaration of Independence. Cherishing the direct interaction between the people working on the same thing, or valuing the continuous adaptation of individuals and teams is just as relevant now as it was 20 years ago, and in some ways, it can be considered timeless.

In the end, Agile is about people helping other people and the Agile Manifesto is still one of the best ways for figuring out how to do that.